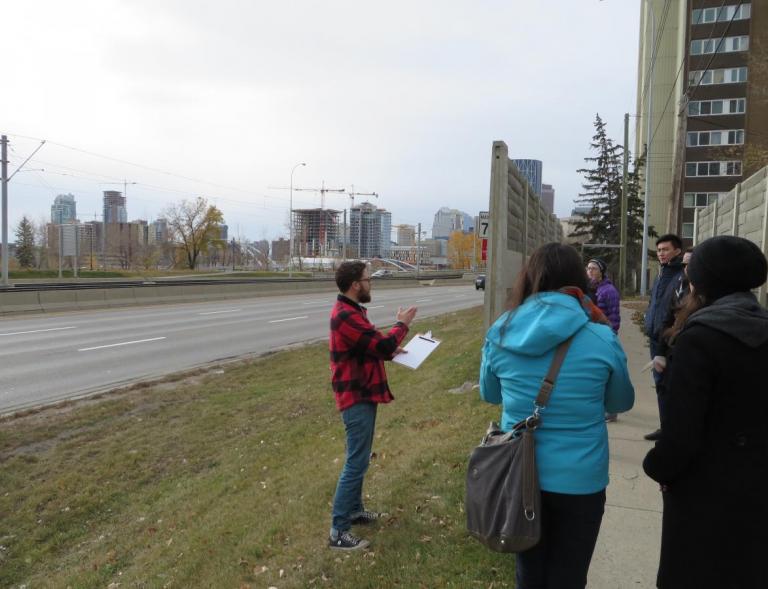 Pedestrian collisions are an issue of equity: Streets in lower-income areas more dangerous for pedestrians

Apart from economic and environmental benefits, neighbourhoods and their residents experience many health benefits from walking and cycling. These benefits include the prevention of cardiovascular diseases, obesity, and mental health issues (Ahmed et al., 2018; McCormack & Shiell, 2011; Pucher & Dijkstra, 2003). Factors such as land use, connectivity, population density, and overall neighbourhood design (McCormack & Shiell, 2011) are associated with higher levels of walking and cycling. When these are not considered in the design of the neighbourhood, it not only discourages residents from walking and cycling, but may also lead to an increase in collisions.

According to the 2018 Road Safety Report on Canada, road fatalities in the country increased by 2% in 2016 from 2015, with the largest increase being in deaths of people walking or cycling (21% and 7% respectively). Conversely, from 2015 to 2016, motor vehicle occupants actually experienced a decrease in road fatalities by 4% (OECD, 2018). In other words, our roads are becoming safer for car occupants but more dangerous for pedestrians and cyclists.

A high number of collisions may also be an indicator that they weren’t built for pedestrians. For example, a pedestrian is more than twice as likely to be hit by a motor vehicle where there is no sidewalk as compared to where there is one (Knoblauch et al, 1984; CCMA, 2013). Studies have also shown that the likelihood of a pedestrian/motor vehicle collision on a street with a paved sidewalk is 88 percent lower than a street without a sidewalk  (McMahon et al, 2002).  Moreover, perceptions of danger arising from factors such as traffic can even discourage people from walking and cycling (Davison & Lawson, 2006; Bennett et al, 2007).  If the way we build our neighbourhoods results in increased collisions and higher perceptions of risk, then it is high time we rethink the way we build them.

Examining the relationship between collisions and neighbourhood socioeconomic status

Over the course of our Active Neighbourhoods Canada (ANC) co-design projects in twelve communities across Alberta, Ontario and Quebec, we have noticed that some lower income neighbourhoods have inadequate pedestrian infrastructure. Arising from this community work, the ANC team wanted to investigate if lower-income areas were at a greater risk for motor vehicle/pedestrian collisions. Recent studies in the US have shown that there is a correlation between collisions and socioeconomic factors such as income, age (young and old), and ethnicity. For example, a study in a Southern California county found that regions with the highest poverty levels had four times as many motor vehicle/pedestrian collisions as the regions with the lowest poverty levels (Anderson et al, 2010). Another study, also in a Southern California county, determined that there were 8.8 times more motor vehicle collisions involving child pedestrians in areas with the lowest income over areas with the highest income (Chakravarthy et al, 2012).

Similar studies have been done in Canada too. For example, a study in Montreal found that pedestrian and cyclist injuries among children in low-income areas were four to nine times greater than those in affluent areas (Pless et al, 1987). Another study in Montreal found that, on an average, there were over six times more pedestrian collisions at intersections in the lowest income census tract than in the wealthiest census tracts (Morency et al, 2012). In Toronto, a Toronto Public Health report found that collisions and injuries of people walking and cycling “appear to be disproportionately borne by vulnerable road users in Toronto: children, elderly adults, and residents of low-income neighbourhoods.” The report also found the walkability index of low-income neighbourhoods to be low or medium-low. Furthermore, according to the report, intersections in the downtown core with the highest volumes of pedestrians also have the lowest collision rates. “In contrast, intersections in Toronto’s suburbs have lower pedestrian volumes and higher collision rates.” (Toronto Public Health, 2012).

A focus on Calgary

To explore whether this relationship between income and collisions involving pedestrians exists in other cities in Canada, the ANC team in Calgary carried out a study. With data from the City of Calgary and the Canadian census, motor vehicle/pedestrian collisions were GIS mapped alongside the average income in every census dissemination area. It was found that, apart from the downtown core of the city, most of these collisions happened in the North-Eastern part of the city. These neighbourhoods are not only some of  Calgary’s lowest income communities, but they also have a higher proportion of new Canadians (Agrawal & Kurtz, 2019). 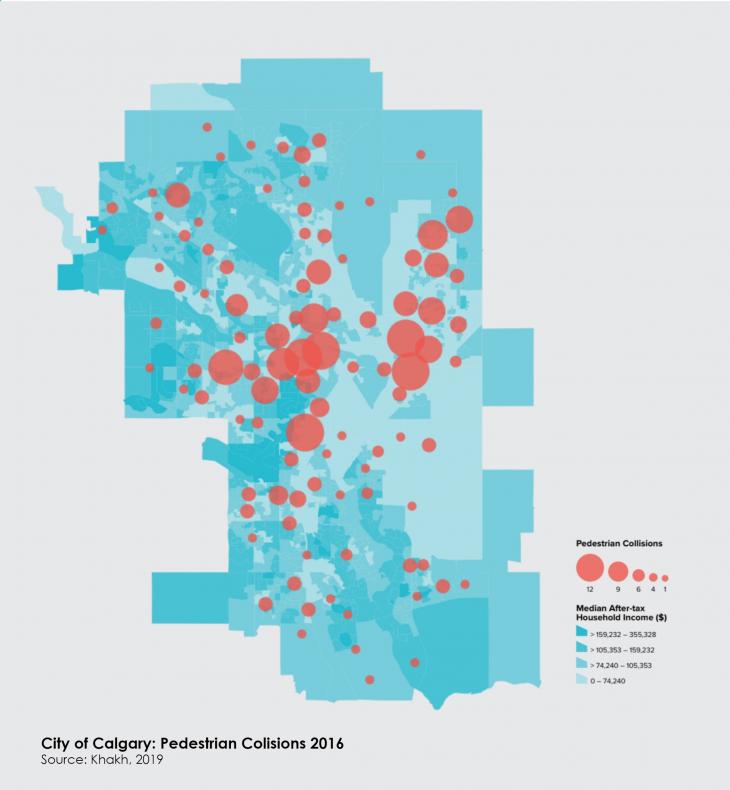 As can be seen in the map, the study found that, while motor vehicle/pedestrian collisions occur throughout the city, they appear to be more concentrated in areas with lower household incomes. However, the correlation between collisions and income alone was relatively weak, suggesting that additional variables could affect the number of collisions such as traffic volume, sidewalk conditions, and weather conditions. At this stage of research, only the total number of collisions were looked at. The volumes of motor vehicles or pedestrians were not considered, and as a result, collisions in denser, more walkable areas may be over-represented in the mapping exercise. The ANC team in Calgary plans to do additional analysis of the data to investigate the impact of pedestrian and vehicle volumes on these collision rates.

All this points to the fact that collisions are an issue of equity. In order to create equitable access to healthy built environments for all Canadian communities, there is an urgent need to prioritise creating walkable neighbourhoods, especially in low-income or otherwise marginalized areas.

Walking is the healthiest, most affordable, and most inherently safe form of transportation. We need to build our communities so that everyone has equal and safe access to this most fundamental form of mobility. Inadequate pedestrian infrastructure in low-income neighbourhoods puts those residents at a high risk of collisions and deepens the inequities experienced by these communities. Applying an equity lens to transportation planning saves lives.